We arrived back at The Secret Acre after Christmas away to find that Santa had delivered a ‘mystery tool’. It was actually a double mystery.

Santa’s Elves had failed to include a note, so we didn’t know who the gift was from. We quickly guessed it was from our friend Derek, he of the Cider Motion Picture and the Boot Rack, as he has past form in the giving of mystery garden tools, which turn out to be fantastically useful, thanks to his own veg growing experience. 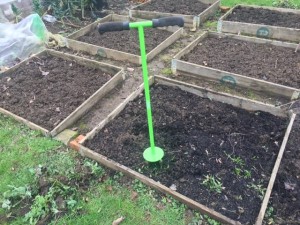 The second mystery, to us at least, was what exactly was this tool? Of course you all know, it’s a Garden Tiller for hand rotavating the soil. Which Emma has duly tested to weed some of our raised beds in January ahead of their Spring compost mulch, and declared it to be ‘fantastically useful’. So looks like Derek might had made another early bid for our occasional ‘tool of the year’ award!